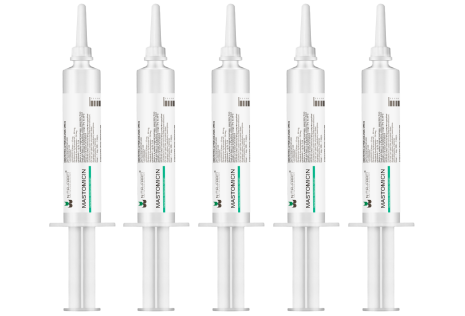 Where to buy Back to products
Gentamicin, clindamycin, lidocaine

An anti-mastitis gel with unique properties of thermal sensitivity that enhance treatment efficacy.

Synergetic effect due to a unique combination of gentamycin and clindamycin

1 - At room temperature, the gel viscosity is close to the viscosity of the liquid, which facilitates the administration of the drug. Exposed to the body temperature of an animal, the gel thickens, while fixing antibiotics and lidocaine on the epithelium of the mammary gland, thus, ensuring that the concentration of the active substance remains at the therapeutic level until the next injection.

An anti-mastitis gel with unique properties of thermal sensitivity that enhance treatment efficacy.

Mastomicin is a transparent, opalescent, colourless to yellow gel. 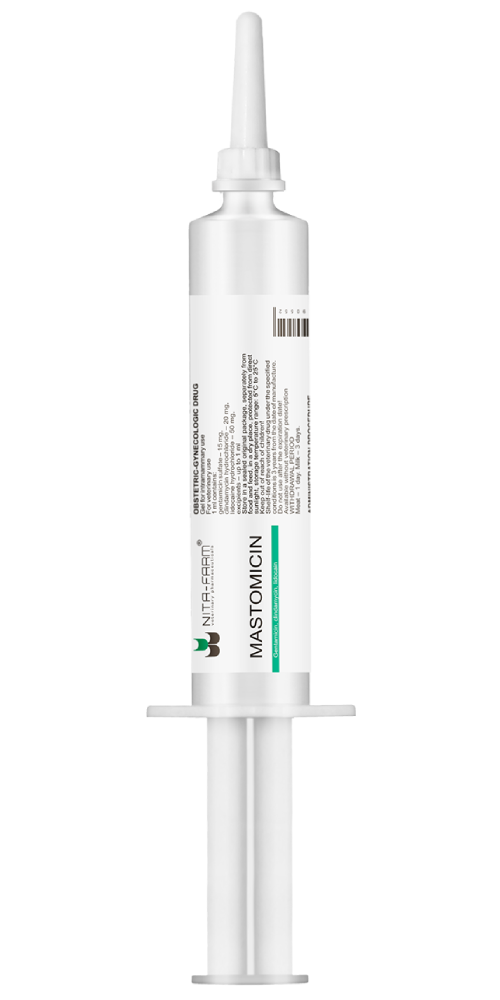 Mastomicin has a broad-spectrum effect against Gram-positive and Gram-negative microorganisms (staphylococci, streptococci, oproteus, Escherichia coli, Salmonella), which are the main pathogenetic cause of mastitis in cows.

Lidocaine has a local anesthetic effect.

Mastomicin is prescribed to treat various forms of bacterial mastitis in cows during lactation.

Mastomicin shall be administered by intracisternal route in the following dose: 10 mL (1 syringe) per each affected udder quarter, 2 to 6 times (depending on the disease severity), with a 12-hour interval until complete resolution of disease symptoms. Before injecting Mastomicin, the affected udder quarter shall be eased, the extracted milk decontaminated by boiling and disposed, and the dug shall be disinfected. The syringe tip is inserted into the dug canal and the syringe contents is injected by pressing carefully the plunger, followed by a gentle massage of the dug and the udder quarters in the upward direction (avoid massaging in case of suppurative and purulent-catarrhal forms of mastitis).

When treating severe forms of mastitis in cows, to achieve the greatest therapeutic effect and reduce treatment period, we recommend to apply Mastomicin combined with the following injectable antibiotics: Amoxygard, Amoxicillin 150, Lexoflon, Nitox 200, and Ceftonit.

Milk can be used for human consumption only in 3 days after the last veterinary drug was administered, provided that no clinical sign of mastitis persists and the fact is confirmed by relevant tests. During treatment, and 72 hours after the last administration of Mastomicin, milk should be eased into separate milk utensils, sterilized by boiling and disposed.

3 years from the date of manufacture