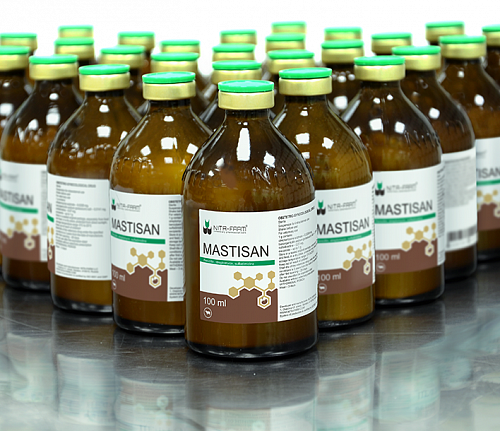 Where to buy Back to products
Streptomycin, benzylpenicillin, sulfadimizine

An intracisternal drug to treat mastitis in cattle.

Highly effective due to a synergetic effect of the components

An intracisternal drug to treat mastitis in cattle.

Mastisan is an oily, homogeneous, creamy suspension with a specific odour, white to cream white in colour. 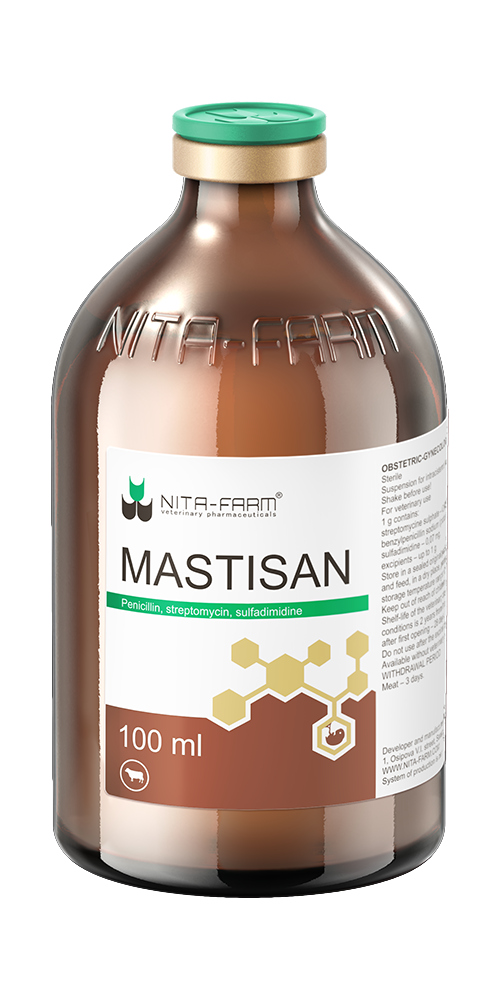 Mastisan has a broad-spectrum antibacterial action, caused by the components of the formulation exhibiting synergism against certain microorganisms. The drug is active against Gram-positive and Gram-negative microorganisms (staphylococci, streptococci, proteus, Escherichia coli, salmonella, etc.).

Mode of action: penicillin eliminates bacteria by suppressing the functional activity of bacterial transpeptidase enzymes involved in peptidoglycan binding, thus interfering with the synthesis of the bacterial cell wall and causing disruption of the osmotic balance and death of bacteria.

Streptomycin refers to aminoglycoside antibiotics. Mode of action: streptomycin eliminates bacteria by violating protein synthesis within a bacterial cell, thus causing a violation in the structure of the cell membrane and the death of bacteria.

Mode of action: sulfadimidine eliminates bacteria by a competitive antagonism with paraminobenzoic acid, inhibiting dihydropteroate synthetase, and violating the synthesis of tetrahydrofolate acid, required to synthesize purines and pyrimidines.

When administered intracisternally, the active substances of the drug are localized in the tissues of the mammary gland, without being absorbed within the systemic circulation, but with a local bactericidal and bacteriostatic effect. Administered intracisternally, Mastisan allows maintaining therapeutic concentrations of antibiotics in the affected quarter of the udder for 24 hours.

Mastisan is prescribed to treat mastitis in lactating cows.

Before administering the drug, the milk is striped out from the affected udder quarters and disposed; the dugs are to be disinfected.

Heat the contents of the bottle up to 36 to 39 °C before use, and shake thoroughly to obtain a homogeneous suspension. 5 to 20 mL of the drug is taken from the bottle with a sterile syringe, the syringe cannula is tightly pressed against the opening of the dug canal and injected carefully into the dug of the udder cistern by pressing the syringe plunger. After the injection, the dug of the affected udder quarter is gently massaged from the bottom up. Depending on the inflammatory process severity, the drug is administered at a dose of 5 to 20 mLwith a 24-hour interval until complete recovery of the affected udder lobes.

The milk, obtained from the affected parts of the udder, can be used in 3 days after the drug was administered for the last time, provided that no clinical sign of mastitis persists. The meat obtained from the animals, killed while being treated with Mastisan, is used on a common basis, except for the udder, which is rejected.

2 years from the date of manufacture; after first opening - 28 days.