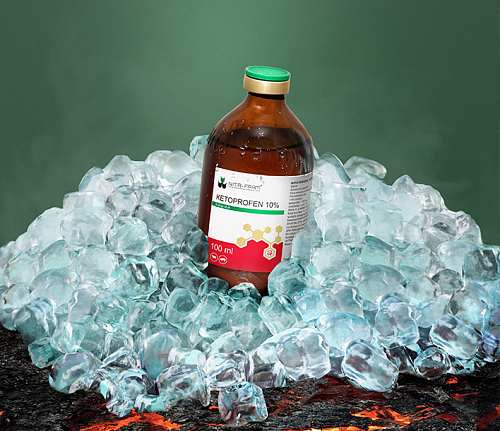 An anti-inflammatory drug with no restrictions set regarding milk consumption and with a minimal restriction period set for meat consumption.

No restrictions for milk consumption

Allowed to be applied in pregnant and newborn animals1.

Particularly effective in treating diseases of the musculoskeletal system2.

An anti-inflammatory drug with no restrictions set regarding milk consumption and with a minimal restriction period set for meat consumption.

Ketoprofen 10% is a clear light yellow to green yellow liquid. 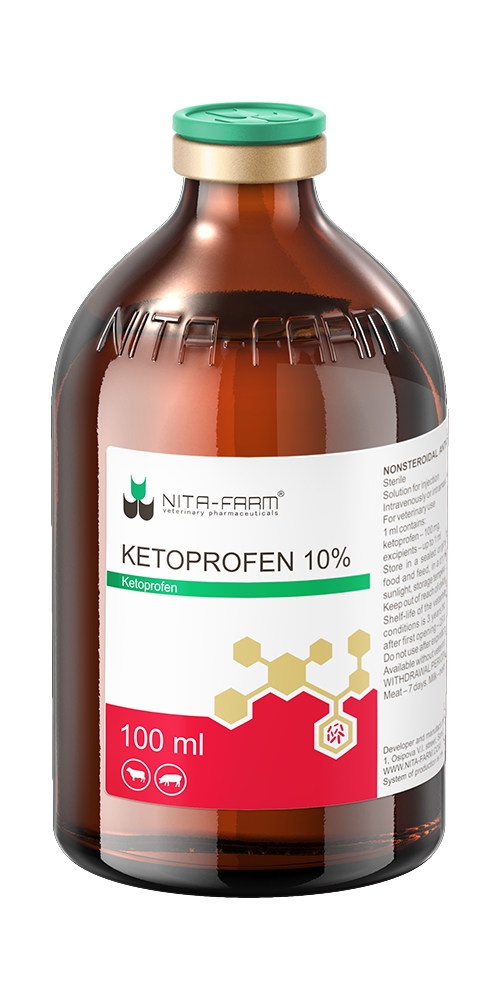 Ketoprofen (a derivative of propionic acid) has an anti-inflammatory, analgesic, and antipyretic effect and inhibits platelet aggregation.

Mode of action: ketoprofen inhibits prostaglandin synthesis as a result of its effect on cyclooxygenase and lipoxygenase mediated arachidonic acid metabolism. The substance stabilizes lysosomal membranes and inhibits neutrophils in animals with arthritis. Ketoprofen is rapidly absorbed from the injection site, enters the bloodstream and most organs and tissues, reaching a plasma maximum concentration after 30 to 40 minutes; more than 98% of ketoprofen binds to plasma proteins and concentrates in the focus of inflammation. Ketoprofen is excreted mainly with urine.

Ketoprofen 10% is prescribed for cattle and pigs as an anti-inflammatory, analgesic, and antipyretic drug within the combination therapy of acute and chronic diseases accompanied by inflammatory processes, pain syndromes, and hyperthermia of various etiologies (obstetric-gynecological, gastrointestinal, respiratory, and musculoskeletal diseases).

The therapy duration depends on the condition of an animal and is to be determined by a veterinarian.

Avoid using the drug in animals that are hypersensitive to the drug composition and those suffering from pronounced renal/liver failure, gastric, and duodenal ulcer, or hemorrhagic syndrome. Use the drug cautiously in animals with dehydration, hypovolemia, and hypotension as ketoprofen may have a toxic effect on the kidneys.

Avoid using Ketoprofen 10% concurrently with other non-steroidal anti-inflammatory drugs, diuretics, glucocorticoids, and anticoagulants; avoid mixing the drug with other drugs in the same syringe.

No restrictions set for the consumption of the milk, obtained from the milked animals treated or being treated with the drug. After the treatment with Ketoprofen 10%, cattle can be slaughtered for human consumption in 5 days, pigs - in 4 days after the drug administered for the last time. In the case of forced slaughter of animals before the established deadlines, the meat can be used for feeding fur-bearing animals.